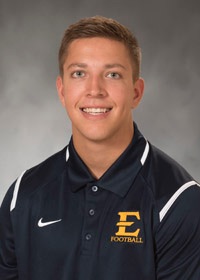 Transferred to ETSU from MTSU … Did not play in any games in 2015 … Redshirted his 2014 season … Earned letters in football and baseball at Franklin High School … Earned all-district honors in 2013 for football … Connected on all five of his field goal attempts his senior year, including a long of 47 yards … Played for Coach Donnie Webb.