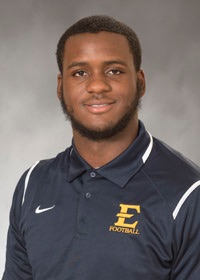 2017 (R-Freshman): Appeared in two games for the Blue and Gold … Made collegiate debut at Western Carolina on Oct. 14, while also playing in the win over VMI on Nov. 4 … Recorded his first collegiate tackle against VMI.