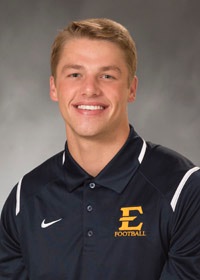 2019 (R-Senior): Appeared in all 12 games for the Bucs in the kickoff unit … Finished the year with a career-best 51 kickoffs for 3,148 yards … Averaged 61.7 yards per kickoff … Concluded the season with 26 touchbacks … Finished the year with four games over 300 kickoff yards, including tying a career-high in attempts with eight for 501 yards and four touchbacks … Recorded at least one touchback in all 12 games, including four touchbacks against Wofford.

2018 (R-Junior): Appeared in 10 games for the Bucs in the kickoff unit … Booted 44 kickoffs for 2,695 yards and 20 touchbacks, averaging 61.2 yards per kickoff … Finished with five games over 300 kickoff yards, including a career-best eight attempts for 513 yards in ETSU’s 45-0 Homecoming win over Gardner-Webb (Oct. 6) … Recorded at least one touchback in seven games, including three touchbacks in five of those seven contests.

2017 (R-Sophomore): Named to the SoCon Honor Roll … Played in all 11 games for the Bucs … Registered 2,955 yards on 46 kickoffs (64.2 average) … Thrity-one of his kickoffs went for touchbacks … Totaled eight punts for 313 yards, including a long of 50 vs. The Citadel … Two of his punts went inside the 20 … Had six kickoffs for 379 yards in the season-opening win over Limestone … All five of his kickoffs went for touchbacks in consecutive games at Furman and vs. Robert Morris.

2016 (R-Freshman): Named to the SoCon Honor Roll … Appeared in all 11 games for the Bucs … Recorded 37 kickoffs for 2,076 yards (56.1 average) with seven touchbacks … Also had eight punts for 290 yards with one fair catch and one inside the 20 … Seven kickoffs for 388 yards and two touchbacks in ETSU’s win over Western Carolina at Bristol Motor Speedway (Sept. 17) … Season-high three touchbacks in the win over West Virginia Wesleyan on Oct. 20 … Season-best 62.3 average in the Bucs’ season-opening win at Kennesaw State on Sept. 3 … Season-high four punts at The Citadel (Oct. 29) … Named Bowman Jewelers Special Teams Player of the Game vs. WVWC.

High School: Played both football and soccer at Spartanburg High School … Was an all-county and all-region selection, while also earning Special Teams Player of the Year honors … Owns the following marks – best punting averages for a season (39.9), longest punt (73), most extra points (78), career extra points (117), touchbacks for the season (83) and career touchbacks (105).