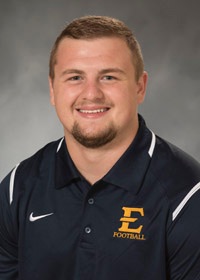 Devin Whitehead enters his third season with the ETSU football program and his first as a graduate assistant for the offense, primarily working with the offensive line.

Whitehead spent his first two seasons as a student-assistant as he helped work with the Buccaneer offensive line.

Prior to ETSU, Whitehead coached the offensive and defensive line at Cloudland High School from 2013-15. During his time at his alma mater, Whitehead helped guide Cloudland to the No. 2 ranking in the state.

Whitehead was a multi-sport athlete at Cloudland High School where he lettered in football, basketball and baseball.

Whitehead graduated with a Bachelor’s Degree in Special Education in May of 2017.