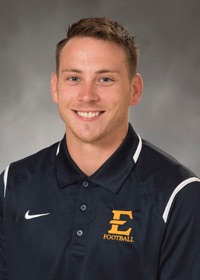 As a player, Davis saw significant playing time at defensive back and special teams in all 11 games as a true freshman at Morehead State University before transferring to the University of Tennessee at Chattanooga. Once at UTC, he suffered a career ending injury.

A native of East Tennessee and graduate of ETSU, Davis has strong ties to the Buccaneer football program. His father, Jeff, was a quarterback at ETSU (1978-80), and he played high school football at Tennessee High under head coach Greg Stubbs, a multiple ETSU record holder (1970-73). He also played and coached under former Buc, Mike Mays (1988-92).

Davis resides in Kingsport, Tenn., with his wife, Emily.