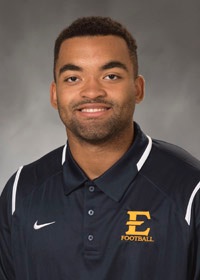 2018 (R-Freshman): Named to the SoCon Honor Roll … Appeared in one game for the Bucs against Gardner-Webb on Oct. 6.

High School: Four-year letterwinner under Coach George Quarles at Maryville High School … Combined for 132 tackles, 27 tackles for loss and 12 sacks over his junior and senior seasons … Named All-Region 1-6A and PrepExtra Second Team Defense in 2016 … Played in the Toyota East vs. West All-Star Game in 2016 and the Kentucky vs. Tennessee Border Bowl in 2017 … Played on the state championship team at Alcoa High School in 2013.

Personal: Son of Lawana and Elliott Purty … Born Sept. 4, 1999 … Majoring in engineering technology with a concentration in construction technology.