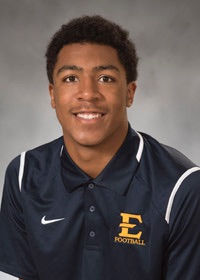 2018 (R-Freshman): Made seven appearances on the season with his first collegiate appearance coming against Furman on Sept. 22 … Finished the year with four tackles (three solo) and one tackle for loss … Recorded his first collegiate tackle against Gardner-Webb on Oct. 6 … Tallied a season-high three tackles (all solo) against Wofford on Oct. 20.