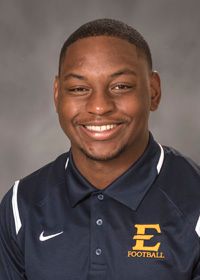 2017 (Sophomore): Played in 10 games, making seven starts in his first season with the Bucs … Finished the season with 46 tackles (22 solo) … Recorded at least one tackle in nine of the 10 games played … Had a season-high 13 tackles vs. The Citadel on Sept. 16 … Finished with six tackles in his ETSU debut against Limestone on Sept. 2, while following that up with seven tackles at No. 1 James Madison the week later.

High School: Played high school football at Warner Robins where he finished with 88 tackles, 1.5 sacks and one interception in 2015 … Led Warner Robins to the 2014 5A Region Championship … Named 2015 Defensive Back Player of the Year … Earned First Team All-County and All-Region honors in 2015.