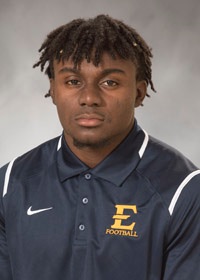 2018 (Junior): Played in two games for the Bucs … Made appearances in the season opener against Mars Hill (Sept. 1) and at Tennessee (Sept. 8) … Tallied three rush attempts against the Volunteers, accumulating nine yards on the ground.

2017 (Sophomore): Played in nine games, making one start … Made first collegiate start in the homecoming win over Robert Morris on Oct. 7 … Totaled 56 rushes for 99 yards and three receptions for 11 yards on the season … Posted a season-high 27 rushing yards in the season-opening win over Limestone on Sept. 2 … Had a season-best 12 carries against Robert Morris … Recorded 11 carries for 19 yards, along with two receptions for 13 yards in the overtime win over Mercer on Sept. 23.

2016 (Freshman): Played in seven games for the Buccaneers in his rookie season … Made collegiate debut in ETSU’s win over Western Carolina at Bristol Motor Speedway … Totaled 183 rushing yards on 49 carries (3.7 yards per rush), while posting two receptions for 13 yards … Finished with a season-high 59 rushing yards on 14 carries at VMI (Oct. 8) … Recorded his first collegiate touchdown in the win over West Virginia Wesleyan (Oct. 20), rushing for 58 yards on 11 carries … Longest run of the season was an 18-yard run at VMI … Named Bowman Jewelers Offensive Player of the Game for the VMI game.