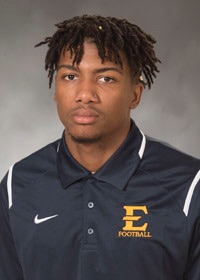 2019 (R-Junior): Turned in a career season during his redshirt-junior campaign … Played in all 12 games on the season with four starts … Finished with 23 receptions for a career-high 342 yards and a personal-best two touchdowns on the season … Tallied a career-high 72 yards receiving against VMI (Sept. 14), while also pulling down a career-long 57-yard touchdown reception.

2016 (Freshman): Played in seven games, making two starts in his rookie season … Made collegiate debut in the win over Western Carolina at Bristol Motor Speedway (Sept. 17), while making his first start at VMI (Oct. 8) … Finished with 10 receptions for 62 yards and one touchdown, along with one rush for 22 yards … First collegiate reception was a 12-yard touchdown catch against Western Carolina … Had a season-high three receptions against Chattanooga (Oct. 1) … Posted two receptions in back-to-back games against Furman (Oct. 15) and West Virginia Wesleyan (Oct. 20) … Longest reception of the season was a 20-yard catch in the win over West Virginia Wesleyan.