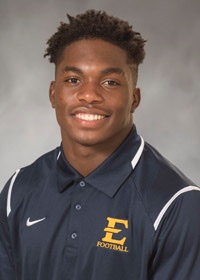 2021 (Senior): Named to both the Phil Steele Magazine All-American Third Team and the HERO Sports FCS All-American Third Team … Awarded a spot on both the Coaches and Media First Team All-SoCon … Appeared and started in all 13 games for the Bucs, playing an instrumental part in a defense that wreaked havoc all season long … Robinson was fifth on the team in tackles with 58, while hauling in a team-high five interceptions … Capped off the season with two fumble recoveries and one forced fumble, while also chipping in for 2.5 tackles for loss … Season-high 10 tackles in the season finale at North Dakota State in the FCS Quarterfinals … Posted a key game with seven tackles in the win over VMI, also recording one of his two fumble recoveries in the win over the Keydets … Returned an interception 98 yards in the win over Samford on Sept. 25, also forcing his lone fumble against the Bulldogs.