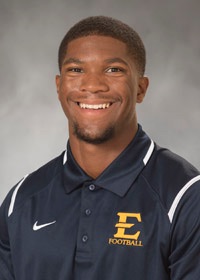 2018 (R-Senior): Named to the SoCon Honor Roll … Appeared in 11 games for the Bucs, finishing the year with eight tackles … Tallied a season-high three tackles against Samford (Nov. 17), including one solo tackle … Recorded two tackles and one pass breakup in the season-opening win over Mars Hill on Sept. 1 … Finished with multiple tackles in three of the 11 games played.

2017 (R-Junior): Named to the SoCon Honor Roll … Played in all 11 games for the Blue & Gold … Finished with 11 tackles, two tackles for loss and one forced fumble on the season … Recorded three tackles at No. 14 Samford on Nov. 11 … Had two tackles each against No. 1 James Madison (Sept. 9), The Citadel (Sept. 16) and Robert Morris (Oct. 7) … Registered tackles for loss against The Citadel and Robert Morris, while also adding a forced fumble vs. The Citadel.

2016 (R-Sophomore): Named to the SoCon Honor Roll … Played in nine of the 11 games for the Bucs … Recorded six tackles, three tackles for loss and one fumble recovery … Finished with three solo tackles (two TFL) against Furman on Oct. 15 … Had one solo tackle (TFL) in the Bucs’ win over No. 18 Samford … Had a fumble recovery in ETSU’s win over West Virginia Wesleyan on Oct. 20.

High School: Was a letterwinner in football and track & field at East Hamilton High School … Was a two-time all-district selection in football … Played in the Tennessee vs. Georgia All-Star game.

Personal: Son of Brennan and Cassandra Francois … Born March 15, 1996 … Majoring in physical education … Played for high school coach Ted Gatewood … Brother Tony is a wide receiver for the Bucs … Cousin Sammy Seamster is an NFL cornerback who was on the Miami Dolphins roster in 2014 and Buffalo Bills’ roster in 2015.