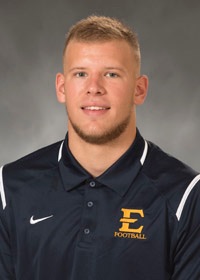 2018 (R-Freshman): Appeared in eight games for the Bucs, making his collegiate debut at Tennessee (Sept. 8) … Concluded the season with three tackles, including his first collegiate tackle in the homecoming win over Gardner-Webb (Oct. 6) … Tallied a career-high two tackles against the Runnin’ Bulldogs and one tackle against Western Carolina (Oct. 27).