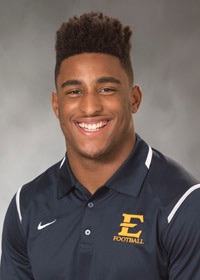 2018 (Junior): Appeared in 12 games for the Bucs, making one start against Jacksonville State in the FCS Playoffs on Nov. 24 … Finished the season with 27 tackles (14 solo), three tackles for loss and one sack … Collected a season-high nine tackles against Jacksonville State, including a season-high four solo tackles …  Finished with one sack and 1.5 tackles for loss in the season-opening win over Mars Hill.

2017 (Sophomore): Named to the SoCon Fall Academic Team and SoCon Honor Roll … Played in ETSU’s first eight games before suffering a season-ending injury … Totaled 22 tackles, 3.5 tackles for loss, two sacks, two quarterback hurries and one fumble recovery … Tied a career high with seven tackles at Furman (Sept. 30) … Posted two tackles for loss and one sack in the win over Mercer on Sept. 23 … Recorded sacks against Robert Morris (Oct. 7) and at Western Carolina (Oct. 14) … Added four tackles and a fumble recovery in that win over RMU.

2016 (Freshman): Named to the SoCon Honor Roll … Played in the final 10 games of the season for the Buccaneers … Recorded 28 tackles, two sacks, and one quarterback hurry in his freshman season … Made collegiate debut in the Bucs’ win over Western Carolina at Bristol Motor Speedway on Sept. 17 … Finished with two tackles against the Catamounts … Season-high seven tackles at Wofford on Sept. 24 … Recorded sacks against West Virginia Wesleyan on Oct. 20 and at Mercer on Nov. 5 … Recorded at least one tackle in nine of the 10 games for the Blue and Gold.

Personal: Son of Claudia Griffin … majoring in engineering technology with a concentration in product development.