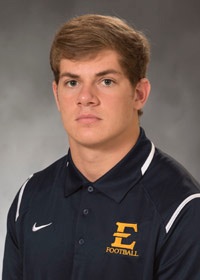 2018 (R-Junior): Appeared in all 12 games for the Blue & Gold … Finished the season with six tackles, including a season-high two at The Citadel on Oct. 13 … Registered tackles in five games for the Bucs, including the playoff contest at Jacksonville State on Nov. 24.

2017 (R-Sophomore): Played in all 11 games for the Buccaneers, primarily used on special teams … Finished with four tackles, including a season-high two against The Citadel (Sept. 16) … Also had tackles against Limestone (Sept. 2) and Chattanooga (Nov. 18).

2016 (R-Freshman): Did not make any appearance on the season.

High School: A three-sport standout athlete at Tennessee High School, playing football, baseball and basketball … Named 2014 athlete of the year … Was an all-conference honoree in 2013 and 2014 … Tied school record for most interceptions in a game with four during his senior season.