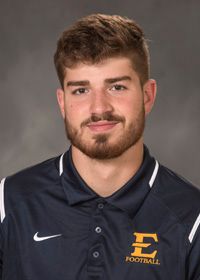 2019 (R-Junior): Named to the SoCon Honor Roll … Played in all 12 games for the Bucs, finishing the season with five tackles … Played primarily on the special teams’ unit.

2018 (R-Sophomore): Played in nine games for the Bucs, finishing with two tackles on the campaign … Recorded one tackle in the season-opening win over Mars Hill and at The Citadel on Oct. 13.

2017 (R-Freshman): Named to the SoCon Honor Roll … Missed entire season due to injury.

High School: Lettered in both football and track & field at Greeneville High School … Named D1-4A Defense Player of the Year in 2015 … Selected second team all-conference in 2014 … Combined for 70 tackles, five tackles for loss, 13 pass break ups, seven interceptions and one fumble recovery in 2014 and 2015 … Recorded nine catches for 107 yards and three touchdowns on offense … Earned all-state honors in high jump.