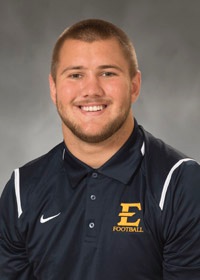 2018 (R-Senior): Named HERO Sports All-American Third Team … Tabbed First Team All-SoCon Defense and SoCon Fall Academic Team … Recognized on Second Team Preseason All-SoCon … Appeared in all 12 games, starting in each contest for the Blue & Gold … Finished the season with 95 tackles (37 solo), 14 tackles for loss, two sacks, three quarterback hurries, one breakup and one safety … Collected a season-high 13 tackles at The Citadel (Oct. 13) and finished with four games of 10-or-more tackles … Recorded a season-high three tackles for loss and one sack against Gardner-Webb (Oct. 6) … Picked up the safety in a 29-27 win over Furman (Sept. 22), finishing the game with nine tackles and two tackles for loss … Ranked third in the SoCon in total tackles (95) and tackles for loss (14.0).

2017 (R-Junior): Named to the SoCon Honor Roll … Received SoCon Defensive Player of the Week honors for the week of Sept. 18 (vs. The Citadel) … Started all 11 games for the Blue & Gold … Led the Bucs with 92 tackles (45 solo), while adding 4.5 tackles for loss, one sack, three quarterback hurries, two fumble recoveries and one forced fumble … Finished tied for eighth in the SoCon in tackles per game (8.4) and fourth in fumbles recovered (0.18) … Recorded at least one tackle in all 11 games, including four double-digit tackle games … Finished with a season-high 19 tackles against The Citadel (Sept. 16), while totaling 12 tackles each against No. 8 Wofford (Oct. 28) and at Chattanooga (Nov. 18) and finishing with 10 at Furman (Sept. 30) … Totaled three tackles for a loss at Chattanooga … Had a 50-yard fumble return in the win over Mercer, while adding another fumble recovery in the win vs. Robert Morris.

2016 (R-Sophomore): Named Second Team All-SoCon … Started all 11 games for the Buccaneers … Led team in tackles (106) … Ranked 21stamong FCS players (second in the SoCon) in total tackles (9.6) and 22nd in FCS in fumble recoveries (tied for fourth in the SoCon) (2) … Recorded double-digit tackles in eight games, including a season-high 12 against Chattanooga (Oct. 1) and Furman (Oct. 15) … Finished with 11 tackles and a fumble recovery in the season-opening win at Kennesaw State on Sept. 3, while adding nine tackles (1.5 TFL) in the win over Western Carolina at Bristol Motor Speedway on Sept. 17 … Posted four straight double-digit tackle games to end the season, including 10 in the win over No. 18 Samford on Nov. 19 … Also posted a fumble recovery against the Bullodgs … Named Bowman Jewelers Defensive Player of the Game vs. Mercer and Impact Play of the Game vs. Samford.

2015 (R-Freshman): Named Finalist for the STATS FCS Freshman of the Year Award … National FCS leader in solo tackles (79) … Led team with 127 tackles (79 solo/48 assisted) and 10.5 tackles for loss, while posting two fumble recoveries … Registered double-digit tackles in nine of the 11 games played … Finished with 20 tackles against Emory & Henry, marking the most by a freshman FCS player in 2015 … The 20 tackles are ranked second-most by a Buccaneer player … Led the team in tackles eight times … Two-time Bowman Jewelers Defensive Player of the Game recipient (Emory & Herny and Montana State).

High School: Lettered for three varsity seasons at Pickerington North High School … Set school records for tackles in a career (389) and season (175) … Was a first-team all-conference, all-district, all-metro and all-state selection … Was named to the Super 25 team … Helped his team to a 30-6 record as a varsity player.