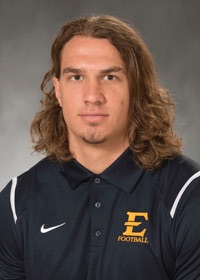 2018 (Senior): Named to the SoCon Honor Roll … Named Second Team All-SoCon Offense … Appeared in 11 games on the season with nine starts … Concluded the season with 16 receptions for 223 yards and two touchdowns … First collegiate touchdown came against Mars Hill with a nine-yard reception in the season-opening win on Sept. 1 … Pulled in a season-high three catches for 42 yards against Furman (Sept. 22), while also collecting three receptions against Wofford (Oct. 20) and Jacksonville State (Nov. 24) … Pulled down his second touchdown of the season against Jacksonville State with a three-yard touchdown catch.

2017 (Junior): Named to the SoCon Honor Roll … Played in all 11 games in his first season with the Bucs … Finished the season with six receptions for 75 yards … Hauled in at least one catch in four straight games from Sept. 9 – Sept. 30 … Collected his first catch with the Bucs at No. 1 James Madison on Sept. 30 … Tallied a season-best 25-yard reception vs. No. 8 Wofford on Oct. 28 … Also had receptions against The Citadel, Mercer, Furman and Samford.

2015 (Freshman): Appeared in eight games at defensive end … Finished the season with three tackles (one solo) … Made first collegiate tackle against Texas A&T.

Personal: Son of Roy and Pan Wick ... Born April 2, 1996 ... Majoring in interdisciplinary studies ... Brother Cole is a rookie tight end for the Detroit Lions, brother Cullen is a freshman defensive lineman at Blinn and has a sister (Amanda).