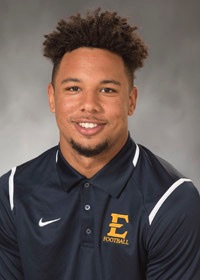 2018 (Sophomore): Played in 10 games with five starts during his sophomore season, starting each of the final five games for the Bucs … Concluded the season with 38 total tackles (25 solo), 3.5 tackles for loss, 0.5 sacks, two interceptions and two pass breakups … Registered his first collegiate interception against Gardner-Webb in ETSU’s 45-0 victory … Second interception came in the FCS Playoffs against Jacksonville State, taking the ball 60 yards to the house for the Bucs’ first touchdown of the game … Collected a season-high 10 tackles (9 solo) in his first career start at Wofford on Oct. 20 … Put together multi-tackle games in seven contests, including four games with five or more tackles.

2017 (Freshman): Played in 10 games in his first season with the Blue & Gold … Totaled 19 tackles (11 solo) and two pass breakups … Posted a season-high four tackles twice – at No. 1 James Madison and at No. 14 Samford … Made collegiate debut in the Bucs’ season-opening win over Limestone on Sept. 2.

High School: Multi-sport athlete at West Caldwell High School – football and basketball … Names Southern District 7 Defensive Player of the Year in 2016 … Also played quarterback for the Wildcats as he led the team to the 2016 conference championship … Registered over 6,600 yards of total offense and 65 touchdowns during his career … Posted 90 career tackles with six interceptions and two fumble recoveries … Averaged over 14 points per game in his career on the West Caldwell basketball team.

Personal: Son of Chester and Krissy Tucker … Born May 29, 1998 … Majoring in interdisciplinary studies.