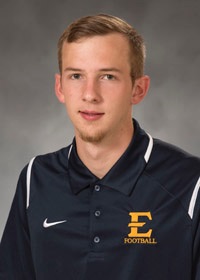 2016 (Sophomore): Named to the 2016-17 SoCon Honor Roll … Appeared in all 11 games as the Buccaneers’ punter … Totaled 60 punts for 2,163 yards with a long of 50 and 18 inside the 20-yard line … Season-high eight punts (four inside the 20) for 307 yards in ETSU’s season-opening win at Kennesaw State on Sept. 3 … Followed that up with three of his four punts landing inside the 20 in the Bucs’ win over Western Carolina at Bristol Motor Speedway on Sept. 17 … Season-long 50-yard punt at Mercer on Nov. 5 … All three of his punts landed inside the 20 in ETSU’s win over Cumberland on Nov. 12 … Earned Bowman Jewelers Special Teams Player of the Game against Kennesaw State.

High School: A two-sport athlete at Marvin Ridge High School, where he participated in football and track … Was an all-state, all-county, all-conference and Greater Charlotte Area selection … Was named area punter of the year … Set school record for punting average … Averaged 49.9 yards per punt on the year and was 13 of 19 on field goals … His longest field goal of the 2014 season was 48 yards, and his longest punt netted 85 yards.

Personal: Son of Mark and Jewel Watson … Born March 4, 1997 … Majoring in management with a concentration in general management and also minoring in marketing … Played for high school coach Brad Hoover.