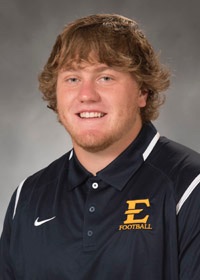 2018 (R-Senior): Appeared in all 12 games for the Bucs as the long snapper … Recorded one tackle against Furman on Sept. 22.

2017 (R-Junior): Appeared in all 11 games as the Buccaneer long snapper … Had tackles against Limestone (Sept. 2) and Robert Morris (Oct. 6) … Named Bowman Jewelers Special Teams Player of the Week following the win over RMU.

2016 (R-Sophomore): Played in the final 10 games for the Blue and Gold … Recorded special teams tackles at Wofford (Sept. 24), versus Furman (Oct. 15) and at The Citadel (Oct. 29) … Made season debut in ETSU’s win over Western Carolina at Bristol Motor Speedway on Sept. 17 … Named Bowman Jewelers Special Teams Player of the Game vs. Wofford and The Citadel.

High School: Played four seasons at Elizabethton High School … Was named conference defensive lineman of the year and participated in the FCA All-Star Game … Was a three-time all-conference selection and helped his prep teams to three conference championships and trips to the state playoffs … Collected 74 tackles, 15 for loss and four sacks his senior season.