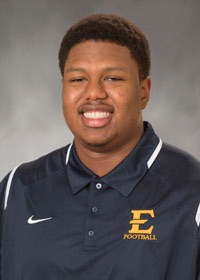 2018 (R-Junior): Played in all 12 games for the Bucs … Taylor’s blocking duties helped pave the way for nine 100-yard rushing games, including four contests of over 200 yards on the ground … Blocked for a season-best six touchdowns against Gardner-Webb (Oct. 6) as well as four rushing touchdowns against Western Carolina (Oct. 27).

2017 (R-Sophomore): Played in the last four games of the season for the Blue and Gold … Primarily used on special teams.

Personal: Son of LaRon Taylor and Consuela Oden … Majoring in finance with a concentration in corporate finance and investments.