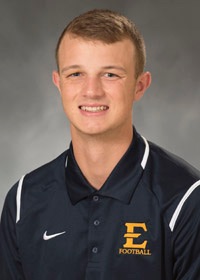 2018 (Senior): Named to the SoCon Honor Roll … Named to the SoCon Fall Academic Team … Concluded the year with 486 receiving yards on 35 receptions with two touchdowns … Led the Bucs in receptions (35), receiving touchdowns (2) and receiving yards (486) … Collected his first collegiate touchdown in the season-opening win over Mars Hill, finishing the game with three catches for 28 yards and a 14-yard touchdown reception … Exploded for 80 yards receiving against The Citadel, including a 12-yard touchdown reception and a season-high 41-yard catch … Registered a season-high eight catches for 84 yards in ETSU’s 45-43 triple-overtime win vs. Western Carolina … Ranked 10th in the SoCon in yards per catch (13.9).

2017 (Junior): Named to the SoCon Fall Academic Team and SoCon Honor Roll … Started all 11 games for the Buccaneers … Finished third on the team in receptions (21) and receiving yards (305) … Had a season-high five receptions in the wins over Mercer (Sept. 23) and Robert Morris (Oct. 7) … Posted a season-best 93 receiving yards against RMU … Finished with two receptions for 78 yards, including a season-long 41-yard reception at Furman (Sept. 30) … Hauled in a pass to convert a two-point attempt against The Citadel (Sept. 16).

2016 (Sophomore): Named to the SoCon Honor Roll … Played in all 11 games, making two starts … Made back-to-back starts at The Citadel (Oct. 29) and Mercer (Nov. 5), marking his first collegiate starts … Recorded 15 receptions for 142 yards, while rushing once for three yards … Had three receptions for 37 yards in ETSU’s win over Western Carolina at Bristol Motor Speedway on Sept. 17 … Finished with three catches at Mercer on Oct. 20 … Had at least one reception in nine of the 11 games played.

2015 (Freshman): Tabbed to SoCon Honor Roll … Played in all 11 games … Finished with six catches for 69 yards on the season … Had a season-best two receptions in season-opener vs. Kennesaw State (Sept. 3) … Longest reception of the season was a 28-yard catch vs. Emory & Henry (Sept. 26).

High School: Played three seasons at Grace Christian Academy … All-district selection as a junior, while earning all-state and all-district honors as a senior … Had 47 receptions for 800 yards and 10 touchdowns as a senior, while also picking up nine interceptions on the defensive side of the ball … For his career, finished with 88 receptions for 1540 yards and 22 touchdowns.

Personal: Son of Michael Kelley and Melissa Bunch … Born May 8, 1997 … Majoring in health sciences with a concentration in microbiology and minoring in sport management … Played for high school coach Randy McKamey.