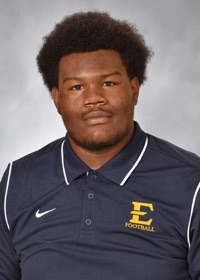 2018 (Senior): Named Second Team All-SoCon Defense … Appeared in 11 games on the season, garnering 10 starts … Concluded the season with 47 tackles (16 solo), 6.5 tackles for loss, 2.5 sacks, two fumble recoveries, one forced fumble and two quarterback hurries … Posted a career-best 12 tackles against Furman on Sept. 22, including one of his 2.5 sacks … Recovered two fumbles against Chattanooga (Sept. 29), while forcing one against Wofford (Oct. 20) … Recorded at least one tackle in each of the 11 games he played in.

2016 (Sophomore): Started all 11 games for the Blue and Gold … Registered 34 tackles (12 solo) with three tackles for loss, one sack, one fumble recovery, one quarterback hurry and two pass break ups … Season-high six tackles with one sack in the win over Cumberland on Nov. 12 … Finished with five tackles and one fumble recovery in the win over No. 18 Samford on Nov. 19 … Five tackles at Wofford on Sept. 24, while posting three tackles in the season-opening win at Kennesaw State on Sept. 3.

2015 (Freshman): Played in all 11 games, making eight starts … Named Bowman Jewelers Defensive Player of the Week vs. Saint Francis … Totaled 30 tackles (15 solo) with 2.5 tackles for loss and 1.5 sacks … Had a season-high seven tackles at Mercer (Oct. 17) … Posted a season-best four solo tackles in his collegiate debut vs. Kennesaw State (Sept. 3) … Finished with sacks in his last two games of the season – half-sack at Gardner-Webb (Nov. 14) and one sack vs. Kentucky Wesleyan (Nov. 21).

High School: Was a four-year letterwinner at Washington-Wilkes High School … Was a two-time all-state and all-area pick, while being selected to first-team, all-region three times … Named team’s top defensive lineman twice … Helped lead his team to a regional championship … Had 90 tackles, 27 tackles for loss and 11 sacks in his career.