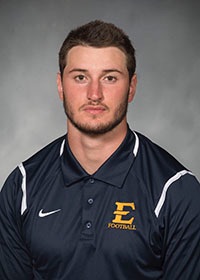 2018 (R-Junior): Appeared in the first six games of the season, including starting the first four contests … Finished the campaign with 657 passing yards and three touchdowns, completing 55-of-114 pass attempts … Tallied 26 rush attempts for 80 yards and one touchdown … Made his ETSU debut against Mars Hill, completing a season-high 17 passes for a season-best 273 yards and three touchdowns (including a career-long 55 yard pass) … Rushed 12 times for 68 yards and one touchdown against VMI, while throwing for 181 yards with 15 completions.

Previous School(s)
Temple University
2017 (R-Sophomore): Played and started in seven games during his sophomore campaign with Temple … Finished the season completing 136 passes for 1,658 yards and nine touchdowns … Passed for 245 yards and two scores in his first career start at Notre Dame on Sept. 2 … Threw for a career-high 356 yards vs. UConn (Oct. 14) and totaled three touchdown passes against UMass on Sept. 15.

2016 (R-Freshman): Played five games during the season, making his collegiate debut vs. Stony Brook on (Sept. 10) … First collegiate completion came against Charlotte on Sept. 24, finishing 2-of-4 for 29 yards … Member of the 2016 AAC Championship team.

2015 (Freshman): Did not make any appearances as a true freshman … Member of the American East Championship team and named to the 2015 AAC All-Academic Team.

High School: Played quarterback for coach Jude Kelly at St. Paul Catholic in Bristol, Conn. … In his 36 career games at St. Paul, Marchi amassed 9,702 yards and 112 passing touchdowns, 789 yards and 12 rushing touchdowns, along with 38 tackles and four interceptions on defense.