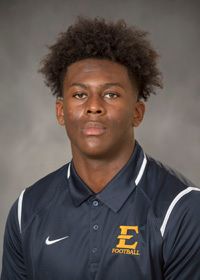 2019 (R-Freshman): Appeared in six games on the season, including the season opener at Appalachian State … Finished the season 4-of-7 for 85 yards and one touchdown … Rushed the ball 11 times for 77 yards and two scores and hauled in 10 receptions for 81 yards … Threw his first collegiate touchdown in ETSU’s 48-10 win over Shorter (Sept. 7) … Rushed for his first collegiate touchdown in the same game over the Hawks, later notching his second rushing touchdown at Furman (Sept. 28).

High School: Signed with the Bucs during the early December period … Multi-sport athlete out of Eagles’ Landing High School (football and baseball) … Totaled over 5,800 yards and 59 touchdowns (47 passing/12 rushing) in three seasons for the Golden Eagles … Passed for 1,978 yards and 14 touchdowns, while rushing for 468 yards and seven touchdowns in his senior season.