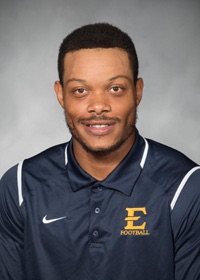 2018 (Senior): Made 10 appearances for the Buccaneers, recording 226 receiving yards (14 catches) … Posted a season-long 46-yard reception in the season-opening win over Mars Hill on Sept. 1 … Had a season-high four receptions for a season-best 64 yards against Western Carolina (Oct. 27) … Also finished the campaign with six tackles (four solo).

Previous School(s)
Georgia State
2017 (Junior): Fourth on the team with 22 receptions for 275 yards ... Made five starts at tight end ... Had his best game as a Panther in win at Coastal Carolina with four catches for 92 yards … His 52-yard reception in fourth quarter set up game-clinching TD ... Career-long 59-yard reception in the season opener vs. Tennessee State ... Had four catches for 27 yards in win at Texas State ... 2017 Preseason Watch List for the John Mackey Award.

2016 (Sophomore): Fifth on the team with 21 receptions for 329 yards … Tied for second with three touchdowns ... Caught his first career touchdown at Air Force on a 22-yard reception from Conner Manning ... Had three catches for 77 yards including a 41-yard reception vs. Texas State ... Season-high four receptions for 60 yards vs. Troy with a 14-yard touchdown catch in the fourth quarter ... Season-long 46-yard reception vs. ULM ... Hauled in a 26-yard pass just shy of the goal line to set up a touchdown vs. Georgia Southern ... Finished the season with four catches for 76 yards vs. Idaho, highlighted by an 11-yard touchdown.

2015 (Freshman): Played on special teams all season and began to see more action at tight end in the second half of the season ... Averaged 16.8 yards on five receptions (84 yards) ... Saw his first playing time on offense vs. App State and had two catches for 21 yards ... Had three receptions for 63 yards vs. San Jose State in the AutoNation Cure Bowl … Caught passes of 20 and 29 yards on a first-quarter touchdown drive ... Credited with three special teams tackles.