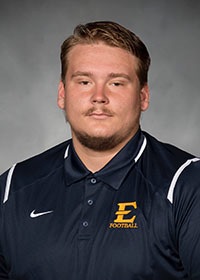 2019 (R-Freshman): Did not make any appearances in his redshirt-freshman season.

High School: Four-year letterman at Greeneville High School … Named Defensive Lineman of the Year … Totaled 71 tackles … Helped lead Greeneville to a 15-0 record and the Class 4A State Championship in 2017.