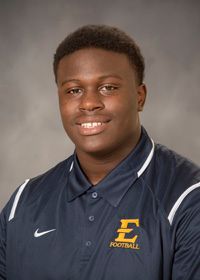 2020 (R-Sophomore)*: Appeared in the first four games for the Bucs this spring … Concluded the year with seven tackles (six solo), while also collecting 3.5 tackles for loss with 2.5 sacks on the year … First sack and tackle for loss came in the season opener against Samford (Feb. 20), finishing the game with two tackles, 1.5 TFL and 1.5 sacks … Tallied a career-high three tackles in the win over The Citadel (March 20).

2019 (Sophomore): Named to the SoCon Honor Roll … Did not make any appearances for the Bucs.

2018 (Freshman): Appeared in six games as a true freshman, making collegiate debut in the season-opening win over Mars Hill on Sept. 1 … Finished the season with three tackles, including his first collegiate tackle against Mars Hill … Also posted tackles against Tennessee (Sept. 8) and Furman (Sept. 22).