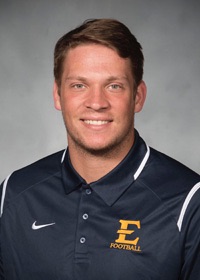 2019 (R-Sophomore): Appeared in all 12 games for ETSU, finishing the season with 11 consecutive starts … Made first Division I appearance against Appalachian State, throwing for 117 yards and one touchdown … Finished the season completing 148-of-265 passes for 1,616 yards and 11 touchdowns … Completed .558 percent of his passes, currently ranking sixth in ETSU history in career completion percentage … Finished the season with an efficiency rating of 116.2 … Completed a career-best 19 passes against Samford, finishing with 182 yards and one touchdown … Tallied a career-best 250 passing yards against VMI, while launching a career-high three touchdowns against The Citadel … Threw at least one touchdown in seven games this season, including four consecutive games with at least one touchdown thrown from Oct. 5 – Nov. 2.

2018 (R-Freshman): Did not make any appearances in his first season with the Bucs.

Personal: Son of Mitch and Carol Mitchell … Born May 30, 1998 … Plans to major in mathematics.