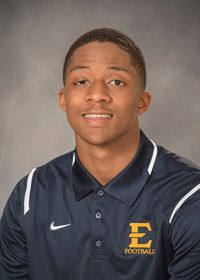 2019 (Sophomore): Played in 11 of the 12 games for the Bucs, starting in four of those 11 contests … Started the final three games of the season, replacing Tyree Robinson who was sidelined due to an injury … Finished the season with 25 tackles, including 15 solo … Hauled in one interception, forced one fumble and broke up two passes on the season … Recorded a career-best six tackles three times on the season, including the season opener at Appalachian State.

2018 (Freshman): Played in three games on the season with one start against VMI on Sept. 14 … Finished the year with six total tackles (four solo), two pass breakups and one interception … Recorded all six tackles and interception against the Keydets in ETSU’s 27-24 win.