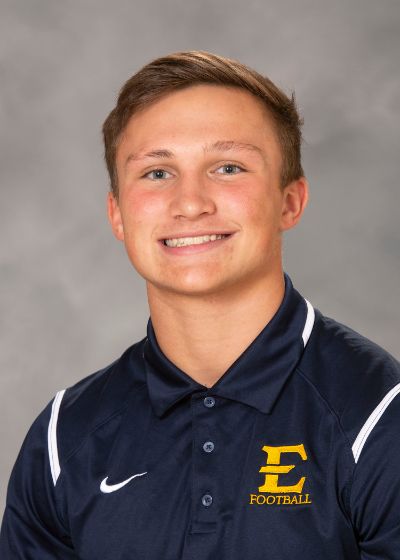 2021 (R-Freshman): Named to the SoCon Fall All-Academic Team … Competed in all 13 games for ETSU with one start on the season in the win over VMI (Nov. 6) … Finished sixth on the team in tackles with 53, including 28 solo tackles … Capped off the year with 6.0 tackles for loss, ranking fourth on the defensive unit … Also capped off the year with two fumble recoveries and one interception … Had a strong game against Furman with four tackles, one interception and one fumble recovery in the final play of the game to seal the 17-13 ETSU win … Career-high nine tackles in the FCS playoff win against Kennesaw State (Dec. 4) to go along with another fumble recovery … Posted six games with five or more tackles.

2020 (R-Freshman)*: Named to the SoCon Honor Roll and the SoCon All-Academic Team … Appeared in all six games for the Bucs, making his collegiate debut in the season opener against Samford on Feb. 20 … Concluded the season with seven tackles (one solo), 0.5 tackles for loss and two pass breakups … Recorded a career-high three tackles against Furman (March 13).