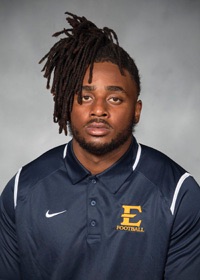 2019 (R-Senior): Appeared in six games in his final season with the Bucs … Concluded the season with nine tackles and 2.0 tackles for loss … Six of his nine tackles were solo wrap ups … Ended the year with one sack … Posted a season high four tackles against Shorter (Sept. 7).

2018 (R-Junior): Appeared in five games for the Bucs, finishing the season with four tackles (three solo) … All four tackles came against Tennessee on Sept. 8.

2017 (R-Sophomore): Appeared in 11 games, contributing on special teams and linebacker … Finished the season with 19 tackles (10 solo) and 2.5 tackles for loss … Had six tackles in the regular season finale against Louisiana.

2016 (R-Freshman): Made his first appearance as a Mountaineer at inside linebacker versus Idaho … Tallied one assisted tackle.