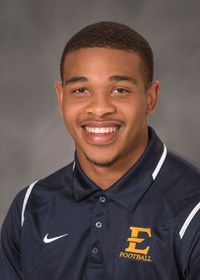 2019 (Sophomore): Appeared in one game on the season, making an appearance against VMI (Sept. 14) … Finished with one quarterback hurry against the Keydets.

High School: Lettered in football, basketball and track & field at TL Hanna High School … Posted 40 tackles, four tackles for loss and one interception his senior year … Totaled 10 tackles for a loss his junior season … Captain of the track and field team that won Region 1-5A Championship and basketball his senior season, while finishing runner up in the regional championship in football in his junior and senior season.

Personal: Son of Travis and Angela Swinger … Born May 13, 1999 … Plans to major in computer science.