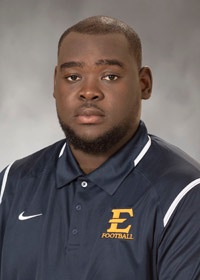 2019 (R-Sophomore): Named to SoCon Honor Roll … Transitioned from offensive line to defensive line in the preseason … Did not make any appearances on the season.

High School: Two-sport athlete at Atlantic High School – football and soccer ... Cousin Brisly Estime is a wide receiver on Syracuse, while his other cousin played defensive tackle at Virginia Tech.