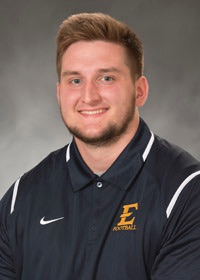 2019 (R-Senior): Named to the SoCon Honor Roll … Made one appearance for the Bucs against Shorter in ETSU’s home-opening win on Sept. 7 … Played in 15 snaps against Shorter, grading out at a perfect 100%.

2018 (R-Junior): Named to the SoCon Honor Roll … Appeared in two games for the Bucs, starting both contests against Mars Hill (Sept. 1) and Tennessee (Sept. 8) … Aided the Bucs’ offensive line in blocking for over 200 yards rushing against Mars Hill in the season-opening win.

2017 (R-Sophomore): Named to the SoCon All-Academic Team and SoCon Honor Roll … Started all 11 games for the Bucs … Smith’s blocking duties helped the Bucs post a pair of two-touchdown rushing games – wins over Mercer and VMI … Helped block for Austin Herink to break the single-game passing record of 434 yards at Furman on Sept. 30.

High School: Was as four-year letterwinner in football at Red Bank High School, while also competing in track and field and baseball … Was a two-time all-state and all-district selection … Earned “Best of Preps” honors on the offensive side of the ball … Attended the U.S. Army National Combine Rivals camp … During his senior season graded out at 89 percent and had 50 pancake blocks.