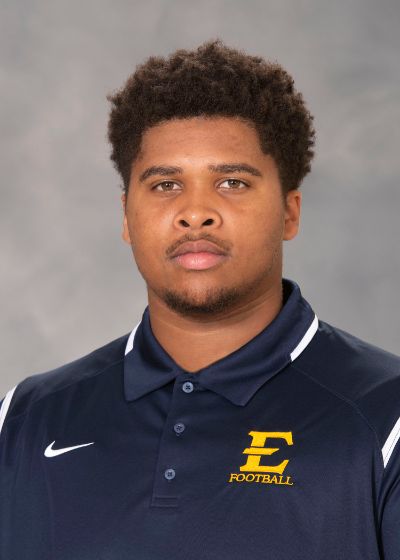 2021 (Sophomore): Earned a spot on the HERO Sports FCS Sophomore All-American Team … Named to both the Coaches and Media Second Team All-SoCon … Appeared and started in 12 games for the Blue & Gold … Aided in blocking for one of the most historic running performances in program history with 2,775 rushing yards and 32 touchdowns … Blocked for 10 100+ yard rushing games, including six games over 200 yards on the ground … While in the starting lineup, ETSU’s biggest output on the ground was 309 yards and four touchdowns against Delaware State (Sept. 18) … Helped block for five rushing touchdowns against The Citadel (Oct. 9) … Named to the Preseason All-SoCon Second Team.

2020 (Sophomore)*: Appeared and started in all six games during the spring season … Played all 401 possible snaps, tied for a team-high in snaps played … Graded out at 98.3% for the second consecutive season … Tied for a team-high 13 knockdowns on the year … Posted a season-high five knockdowns in the finale at Mercer (April 10) … Aided the Bucs in blocking for four 100+ yard rushing games, including 350 yards on the ground in the win over Western Carolina (March 27).

2019 (Freshman): Appeared and started in all 12 games as a true freshman … Made first collegiate appearance and start on the road against Appalachian State (Aug. 31) … Played in 756 of the possible 760 snaps, ranking third on the team in snaps played … Graded out at 98.3% in his 756 snaps and finished the campaign with 32 knock downs … Aided the Bucs in totaling nine 100-yard rushing games, four 200-yard contests and one 400-yard rushing game … Blocked for Quay Holmes’ program-record 255-yard rushing game in the home finale as ETSU defeated Mercer, 38-33.