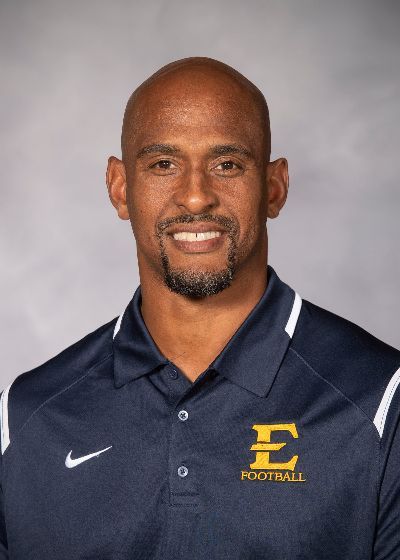 Former N.C. State running back and NFL veteran Gary Downs was announced as the Buccaneers’ running backs coach on March, 4, 2015. Downs is now entering his seventh season with the Blue and Gold, including his fourth season as the recruiting coordinator.

In six years as the running backs coach, Downs has overseen tremendous success in the ground game. In just the six games in the spring 2021 season, the Bucs rushed for 896 yards. In 2019, ETSU ran for 2,062 yards which marked the ninth most yards in a single season in program history and the first time since 1999 that the Bucs eclipsed 2,000 rushing yards. The Bucs rushed for 4.85 yards per attempt in 2019, the most in a single season in school history. The 2019 Bucs also posted the highest-ranking rush offense under Downs, ranking 39th in FCS with 171.8 yards per game.

Coach Downs’ running back squad has been led by Quay Holmes and Jacob Saylors for the last three seasons. Holmes set a program record for rushing yards in a single game under Downs’ tenure, rushing for 255 yards in a 38-33 win over Mercer in 2019. Holmes currently ranks third in program history for career rushing yards with 2,711 in three seasons of action. Under Downs’ watch, Holmes has captured the 4th and 8th most rushing yards in a single season in ETSU history, including 1,143 yards in 2019 which ranks fourth. Saylors turned in the third-most yards per carry in a single season in 2018 with 7.2 per attempt. The duo both rank inside the top six in program history for career yards per carry with Saylors leading the program at 6.3 yards per attempt.

Downs has seen 11 running backs account for 44 total touchdowns in his six seasons, including 28 touchdowns from Holmes.

Downs has coached a total of seven all-conference honorees and has coached Holmes to being named the SoCon Freshman of the Year. Downs has also coached six All-American candidates.