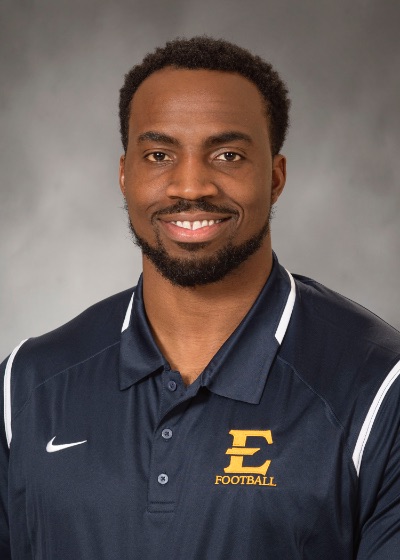 Hired by head coach Randy Sanders and now entering his third year, Collins Ukwu has had a hand in the defensive front. On Jan. 23, 2020, Ukwu was promoted to Defensive Line Coach, following a two-year stint as the Defensive Ends Coach for the Bucs.

The defensive ends have wreaked havoc among imposing offenses, especially in the previous two seasons under the direction of Ukwu. The 2018 season proved a dominating season on the defensive line leading the SoCon tackles for loss per game (7.7). The Bucs also ranked second in rushing defense (132.3) and total defense (351.2). The 132.3 yards allowed rushing is the fourth-fewest yards allowed on the ground in a single season in ETSU history.

Ukwu has coached players such as Nasir Player and Jason Maduafokwa. Player finished fifth in ETSU history in tackles for loss with 40. Player has been named to six all-conference teams throughout his career and six All-American teams, including three in 2019.

Ukwu spent the 2017 season as the defensive line coach at Albany State before transitioning to Johnson City. Ukwu coached Zavondric Singleton to First Team All-SIAC honors as he aided an ASU defense that finished third overall in both total defense and scoring defense. Overall, Singleton totaled 42 tackles, 10.5 tackles for loss and a team-leading 3.5 sacks in 2017.

Prior to his time with the Golden Rams, Ukwu spent two seasons at Georgia State as a player personnel and offensive/defensive graduate assistant in 2015 and 2016. Ukwu also handled recruiting duties at Georgia State.

Ukwu began his coaching career at Overton High School in Tennessee in 2014, where he handled defensive assistant duties.

Ukwu was a four-year starting defensive lineman at Kentucky from 2009-12 and totaled 109 tackles (57 solo), 16 tackles for loss, seven sacks, three forced fumbles and three fumble recoveries in 47 career games. Ukwu was named team captain for his senior season in 2012. Ukwu signed as a rookie free agent with the Minnesota Vikings and later with the Montreal Alouettes before suffering a career-ending knee injury.