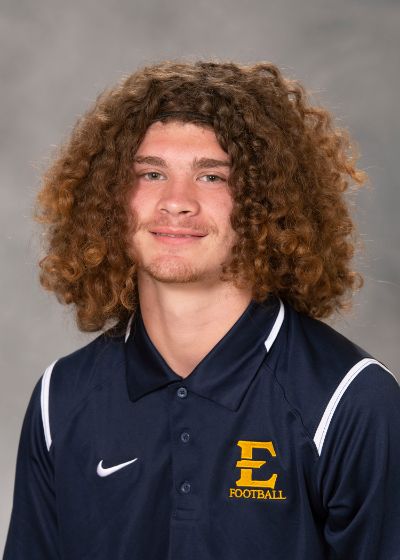 2021 (R-Freshman): Orchestrated one of the greatest seasons in program history with 11 wins … Earned a spot on the HERO Sports Freshman All-American Team and the Phil Steele Magazine All-Freshman Team … Appeared and started all 13 games behind center for the Bucs … Concluded the season with 2,464 passing yards on 211-of-338 completions … Threw for 19 touchdowns on the year and rushed for three touchdowns … Held an efficiency rating of 139.25 and logged 189.5 passing yards per game … Threw at least one touchdown in each of the first 12 games until the season finale in Fargo … Recorded four games with multiple touchdown passes, including a trio of games with three touchdown throws … Was Mr. Efficient in the de facto SoCon Championship game against Mercer (Nov. 20), finishing 26-of-29 with 265 yards and three touchdowns, while rushing for a score and earning SoCon Offensive Player of the Week … Posted six games where he passed for over 200 yards, including a season-high 291 passing yards at Samford (Sept. 25) … His 19 passing touchdowns are second in program history for a single season, while he ranks third in single-season completions (211), completion percentage (.624) and fourth in both pass attempts (338) and passing yards (2,464) … His 2,382 yards of total offense is fifth all-time in a single season in ETSU history … Currently ranks first all-time in completion percentage (.614) heading into the 2022 campaign.

2020 (R-Freshman)*: Appeared and started in the first three games of the season … Finished the year completing 50 of 82 passes for 575 yards and three touchdowns … Concluded the year with a passing percentage of 61.0% and an efficiency rating of 127.07 … Averaged 191.7 passing yards per game … Threw for a career-best 207 yards against Furman, completing 22 of 35 passes … Tallied a career-high two touchdown passes in ETSU’s 28-21 win at The Citadel on March 20.

2019 (Freshman): Named to the SoCon Honor Roll … Appeared in four games for the Bucs, including the final three games of the season … Completed 17 of 33 passes on the season for 193 yards and one touchdown … Finished the year with an efficiency rating of 110.6 … Rushed the ball 13 times for 23 yards … Posted a career game in the win over Mercer, finishing 8-of-12 for 116 yards and his first collegiate touchdown … Redshirted the remainder of the season.