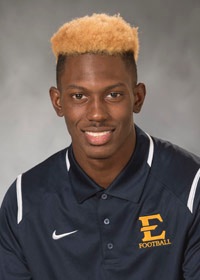 2021 (Senior): Appeared and started in all 13 games during the fall … Capped off his final season with 53 tackles, 3.5 tackles for loss, one interception and six pass breakups … His biggest game was in the season-opening upset at Vanderbilt where he finished with 10 tackles and one interception, taking the ball 95 yards to put the game away against the Commodores … Also had back-to-back performances with six tackles against Western Carolina and Mercer, helping the Bucs lock up the program’s first-ever outright SoCon title.

2020 (Senior)*: Appeared and started in each of the six games for ETSU … Finished the season with 19 tackles (14 solo) … Capped off the year with four pass breakups, ranking second on the team … Scooped up two fumble recoveries on the season (The Citadel & VMI) … Picked up the game-winning fumble recovery against the Keydets to seal the 24-20 win on April 3 in Lexington, Va. … Wrapped up a season-high five tackles in the win against The Citadel on March 20.