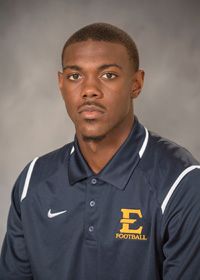 2021 (R-Sophomore): Earned a spot on the HERO Sports Sophomore All-American Team … Named to the Phil Steele Magazine First Team All-SoCon … Appeared and started in all 13 games for ETSU and turned in a dominating performance with 58 receptions for 798 yards and five touchdowns (all team highs) … The 58 receptions rank sixth-most in a single season in program history, while his 798 receiving yards are the 10th most in a single season … Averaged 61.4 receiving yards per game and 13.8 receiving yards per reception this fall … Also had one carry for 49 yards on the year, finishing third on the team in all-purpose yards with 847 … Posted three games with a season-high eight catches, including a season-best 113 receiving yards and one touchdown in the win at Samford (Sept. 25) … Posted one touchdown reception in five different games this season … Recorded multiple catches in each of the 13 games this year and hauled in 50 receiving yards in nine of the 13 games he played in … Will enter the 2022 season 10th all-time in receiving yards (1,438) and eighth all-time in program history in receptions (106).