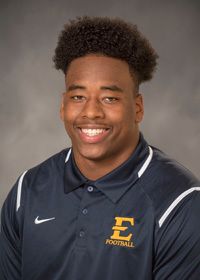 2021 (R-Sophomore): Earned a spot on the Phil Steele Magazine Second Team All-SoCon … Competed in 12 games with 10 starts on the year … Finished the season with a career-best 37 tackles, including 23 solo tackles … Recorded a team-high 10.0 tackles for loss and 6.0 sacks, the seventh-most sacks in a single season in program history … Also hauled in one interception on the campaign … Posted a career game against Delaware State (Sept. 18) with seven tackles, 4.0 tackles for loss and 4.0 sacks … His 4.0 sacks against the Hornets is tied for the second-most sacks in a single game in program history … Also posted 2.0 tackles for loss against The Citadel (Oct. 9) and Chattanooga (Oct. 16) … Recorded five or more tackles in three games on the year.