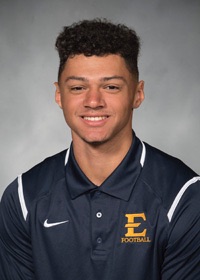 2021 (R-Sophomore): Appeared in nine games for the Bucs with six starts on the season … Hauled in 18 receptions for 253 yards … Averaged 28.1 yards per game and 14.1 yards per reception … Brought in a season-best five receptions for 78 yards against The Citadel (Oct. 9) … Season-long 36-yard reception came in the SoCon title game against Mercer (Nov. 20) … Posted multiple catches in six games on the year.

2020 (R-Sophomore)*: Named to the SoCon Honor Roll … Appeared and started in all six games for ETSU during the spring season … First collegiate start came in the season opener against Samford, resulting in his best collegiate performance with four receptions for 83 yards and his first career touchdown … Capped off the season with 14 receptions for 224 yards and one score, finishing second on the squad in all three categories … Averaged a team-high 16.0 yards per reception, while chipping in 37.3 yards per game … Hauled in at least one reception in each of the six games this season with a career-best four catches against Samford (Feb. 20) and Furman (March 13) … Finished the year with one rush for 23 yards in the season finale at Mercer … Ranked fourth on the squad in all-purpose yards with 247.