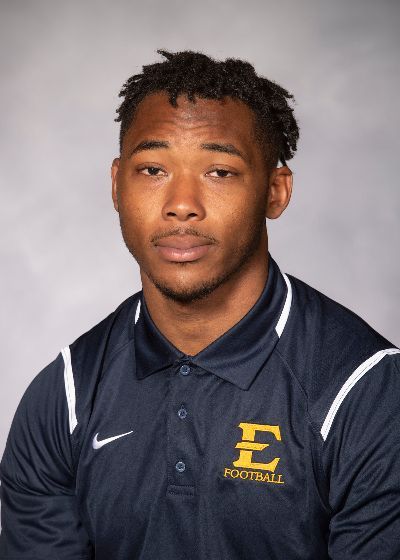 2021 (R-Sophomore): Named to the Coaches Second Team All-SoCon … Appeared and started all 13 games for ETSU in the defensive backfield … Finished fourth on the team in tackles with 73, including 48 solo tackles … Recorded 2.0 tackles for loss and six pass breakups … Recorded 10 tackles against UVA Wise (Sept. 11) and in the FCS quarterfinals game at North Dakota State (Dec. 11) … Posted five or more tackles in seven games on the year.

2020 (R-Sophomore)*: Appeared in all six games for the Blue & Gold, garnering five starts on the campaign … Finished the year second on the squad in total tackles with 48, while leading the way in unassisted tackles with 27 … Capped off the season with 1.5 tackles for loss and 0.5 sack, while also chipping in for one pass breakup … Averaged 8.0 tackles per game … In his ETSU debut, Price finished tied for a team-high nine tackles as the Bucs handed Samford a 24-17 loss in the season opener … Tallied double-digit tackles on two occasions, leading the Bucs with 10 tackles against Furman (March 13) and logging a career-best 14 tackles in the season finale at Mercer (April 10).

2019 (R-Freshman): Appeared in all 14 games in 2019 for the Mountaineers, accumulating 12 tackles on the season … Recorded a season-high three tackles in the win over North Carolina … Also tallied one tackle in the season opener against ETSU.

2018 (Freshman): Appeared in one game against Gardner-Webb … Redshirted the remainder of the season.

Personal: Son of Guy and Alexia Price … Has one sister, Alexandria.