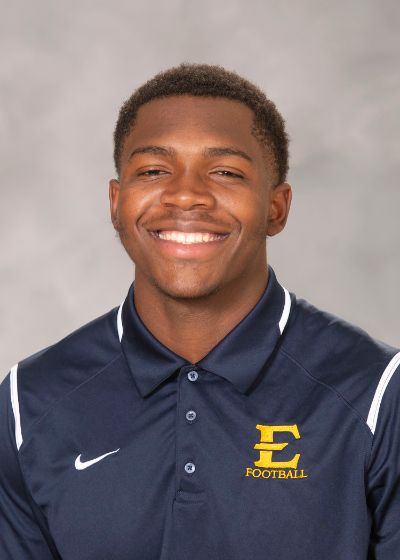 2021 (Sophomore): Appeared in five games on the year with one start before missing the remainder of the season with an injury … Hauled in eight receptions for 184 yards and two touchdowns … Averaged 36.8 yards receiving per game and 23.0 yards receiving per catch … Posted back-to-back games with a touchdown against Delaware State (Sept. 18) and Samford (Sept. 25) … First career touchdown reception came against the Hornets, a 14-yard connection … Hauled in a career-long 65-yard reception for a touchdown in the back-and-forth affair against Samford … Had one kick return for 11 yards, posting 195 all-purpose yards on the shortened season.

2020 (Sophomore)*: Named to the SoCon Honor Roll … Appeared in four games for ETSU, starting the first two games of the season … Concluded the year with eight receptions for 49 yards, averaging 6.1 receiving yards per catch … Opened the season with a career-high five receptions for 34 yards in the win over Samford on Feb. 20 … Hauled in at least one catch in each of his four appearances.

2019 (Freshman): Named to the SoCon Honor Roll … Appeared in six games for the Bucs with six starts: Austin Peay (Sept. 21), Furman (Sept. 28) and Wofford (Oct. 5) … Pulled down 13 receptions for 119 yards before being sidelined for the final six games due to an injury … Recorded a career-high four receptions for a career-best 47 yards against VMI (Sept. 21) … Also hauled in four catches against Wofford for 29 yards.