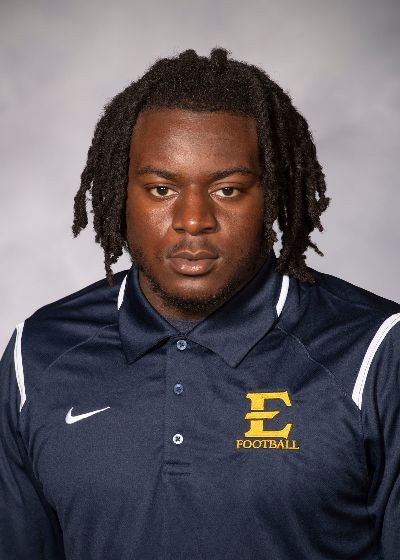 2021 (R-Freshman): Appeared and started in all 13 games for the Bucs … Concluded the year with 31 tackles, including 16 solo … Recorded 3.5 tackles for loss, one interception and three pass breakups … His first career interception came against Western Carolina where he returned it 18 yards … Season-high six tackles against VMI (Nov. 6) and North Dakota State (Dec. 11).

2020 (R-Freshman)*: Named to the SoCon All-Freshman Team … Appeared and started in all six games for the Bucs, making his first collegiate appearance and first collegiate start in the season opener against Samford on Feb. 20 … Finished the season with 14 tackles, including 10 solo … Tallied 2.0 tackles for loss and 1.0 sack on the season … Forced two fumbles in ETSU’s 28-21 win over The Citadel on March 20, registering his first collegiate sack in the process … Put together a career-game at VMI with five tackles, including 1.0 tackles for loss … Recorded at least one tackle in all six games for the Bucs.

2019 (Freshman): Redshirted as a true freshman.

High School: Lettered as an outside linebacker/strong safety at Hough High School … Totaled 46 tackles and one fumble recovery as a junior … Helped guide the Huskies to an 11-win season in 2018, including making a trip to the third round of the NC 4AA Playoffs.