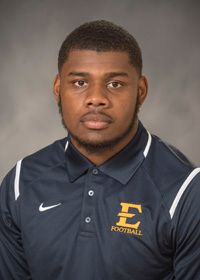 2021 (R-Sophomore): Named to the HERO Sports Sophomore All-American Team and the All-American Third Team … Earned a spot on the Coaches and Media First Team All-SoCon … Named the SoCon Defensive Player of the Month in November with 37 tackles in a three-game span … Twice earning SoCon Defensive Player of the Week following the win over VMI (Nov. 6) and Western Carolina (Nov. 13) … Appeared in all 13 games on the year with 12 starts … Led the Bucs in tackles with 124, including 67 solo tackles … Finished the season with 9.5 tackles for loss, ranking second on the team, while also recording 3.0 sacks, one forced fumble and two fumble recoveries … Posted five games with double-digit tackles, including a career-high 16 tackles in the win over VMI (Nov. 6) … His two fumble recoveries and his lone forced fumble all came when he had double-digit tackling performances … Combined 31 tackles in back-to-back weeks against VMI and Western Carolina … Named to the Preseason All-SoCon Second Team.

2020 (R-Sophomore)*: Named to the SoCon Honor Roll … Named to the HERO Sports All-American Sophomore Team … Garnered a spot on the Coaches First Team All-SoCon … Named SoCon Defensive Player of the Week on Feb. 22 after the season-opening win against Samford … Appeared and started in five games this spring … Opened the season with nine tackles (6 solo), 2.0 tackles for loss, 2.0 sacks, one forced fumble and the hauled in the game-winning interception as ETSU defeated the Bulldogs … Capped off the year with 44 tackles (22 solo) to rank third on the team in total tackles … Led the defense in tackles for loss (6.0) and sacks (3.5), both of which marked career highs despite the shortened season … Also finished the year with two interceptions, one forced fumble and two quarterback hurries … Recorded interceptions in back-to-back games to open the season (Samford & Furman) … Tallied a season-high 11 tackles in the finale at Mercer … Recorded at least six tackles in all five games and successfully registered at least 1.0 tackles for loss in four of his five games played.