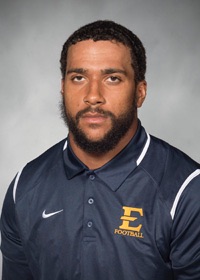 2021 (Graduate): Became NCAA’s first-ever eight-year student-athlete to compete in a single sport … Awarded a spot on the Coaches First Team All-SoCon and the Media Second Team All-SoCon … Tabbed with an appearance on the Phil Steele Magazine All-American Second Team … Appeared and started in 11 games on the year, playing in the final 11 contests … Finished second on the team in total tackles with 94, the most tackles of his collegiate career … Finished the year with 44 solo tackles, 6.5 tackles for loss and 3.0 sacks … Also hauled in one interception on the season against VMI (Nov. 6) … Recorded double digit tackles four times, including a career-high 15 tackles in the FCS playoff win over Kennesaw State (Dec. 4) … Named to the Preseason All-SoCon First Team.

2020 (Graduate)*: Appeared on a pair of postseason All-American squads: Phil Steele All-American Third Team and the AFCA All-American First Team … Named the SoCon Defensive Player of the Year, first Buccaneer to claim individual SoCon Player of the Year honors since Mario Hankerson in 1997 … Named to the All-SoCon Coaches First Team and the Media Second Team … Appeared and started in all six games for the Bucs … Led the Bucs in total tackles with 50, including 23 solo tackles on the year … Finished fourth on the squad in tackles for loss (4.0) and concluded the year with four quarterback hurries and 1.0 sack … Posted a season-high 11 tackles at The Citadel, recording 0.5 sack in the process … Eclipsed double-digit tackles on two occasions (The Citadel – 11 & Mercer – 10) … Put together five or more tackles in each of the six games played this year.

2019 (Graduate): Tabbed to the SoCon Honor Roll team … Named to the Phil Steele Magazine Preseason Second Team All-SoCon … Saw action in five games with two starts … Missed significant time due to a lingering injury … Finished the season with 28 tackles and 1.5 tackles for loss … Recorded one sack in five games.

2018 (R-Senior): Named to the SoCon Honor Roll … Named Second Team All-SoCon Defense … Tabbed September SoCon Athlete of the Month … Named SoCon Defensive Player of the Week (Sept. 17) … Appeared in 11 games for the Bucs, starting in each game played … Recorded 80 tackles on the season, including 36 solo … Finished the season with 9.5 tackles for loss, six sacks, one forced fumble, one interception and eight quarterback hurries … Recorded a career-high 11 tackles at Mercer (Nov. 3) … Tallied a career-best 3.5 sacks at VMI on Sept. 14, while also forcing one fumble and pulling down one interception … Finished with five or more tackles in 10 of the 11 games played … Finished fourth in the SoCon in sacks per game (0.55), 10th in tackles for loss (9.5) and 16th in tackles per game (7.3).

2015 (R-Freshman): Suffered a shoulder injury that required surgery and missed the entire season.

2014 (Freshman): Redshirted as a true freshman.

High School: Played for coach Joe Headen at Susquehanna Township HS … A two-year letterman … Posted 10 sacks, one interception and one TD as a senior, earning all-conference honors … Had eight sacks and one interception his junior year.