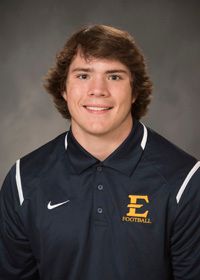 2021 (Junior): Named to the SoCon All-Academic Team … Named to the Coaches Second Team All-SoCon … Appeared in 13 games for the Bucs with 11 starts on the campaign … Ranked third on the team in receptions (33) and in receiving yards (357) … Averaged 10.8 yards per catch and 27.5 receiving yards per game … Also finished the season with one touchdown, hauling in the lone touchdown against The Citadel (Oct. 9) … Hauled in a career-high seven receptions for 94 yards in ETSU’s thrilling win over Kennesaw State (Dec. 4) in the FCS playoffs … In the playoff game, Adkins caught the two-point conversion pass to give the Bucs the one-point victory … In the final two drives against the Owls, Adkins was responsible for five receptions for 71 yards … Earned a spot on the Preseason First Team All-SoCon.

2020 (Junior)*: Named to the SoCon Honor Roll, SoCon All-Academic Team and was awarded the Commissioner’s Medal … Tabbed to the FCS ADA Academic All-Star team … Named to the Coaches First Team All-SoCon … Awarded a spot on the First Team Preseason All-SoCon team … Appeared in all six games for ETSU, starting the final four games of the year … Capped off the season with 10 receptions for 101 yards, ranking fourth on the team in receiving yards and fifth in total receptions … Hauled in at least one reception in each of the final five games … Season-long reception of 22 yards in the win at The Citadel (March 20) … Posted a season-best performance in the finale at Mercer (April 10) with four receptions for 39 yards.